You are here: Home » Blog » Uncategorized » Fun with Food!

We began our elective program last week (finally no snow!) and it was great!

Students met in their Hevruta groups to study the first sentence of the text “Ha Lachma Anya” (This is the bread of slavery…) from the Passover Haggadah.  Everyone shared some very interesting insights as to why Matzah is called the bread of slavery.  Some examples included the fact that Matzah is plain and has no taste and this connects to the kind of lives the Israelites led as slaves. Someone else also suggested that because the matzah was baked quickly this connected to slavery because perhaps the slaves didn’t have enough free time to cook and enjoy a good meal.

In our food elective students had fun sampling different types of food, both kosher for Passover and hametz.  The Crispeo cereal for Passover was not popular while everyone enjoyed the chocolate and cookies, both pesadik and hametz!  After tasting cereal, chocolate, crackers and cookies, students used one adjective to describe the taste and discussed which foods they considered to be a food of freedom and which they considered to be a food of slavery.  The chocolate and cookies definitely represented freedom in the eyes of most people!

As a group we took a vote on which foods were slavery and which were freedom.  In the second part of the afternoon students tasted maror (bitter herb) – a horseradish root, red and white horseradish and romaine lettuce.  They then studied a short text from the Haggadah about maror and identified words in the text that showed that maror was a food of slavery and injustice. 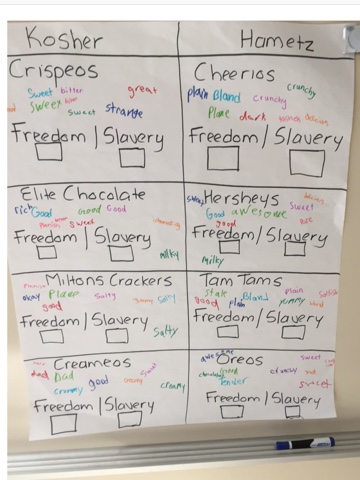 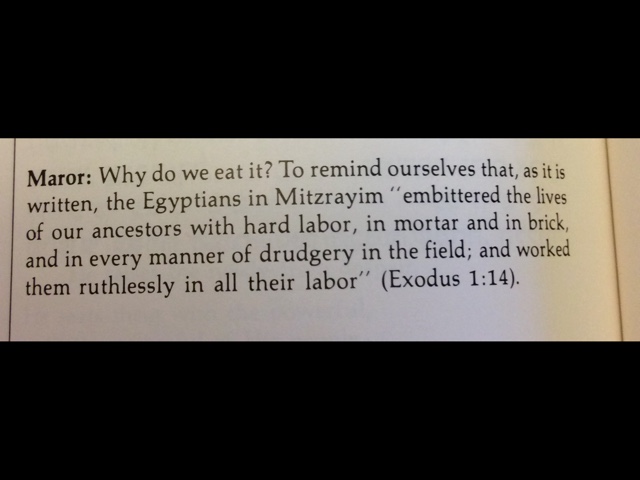 Next week we look forward to making matzah ball soup, and students will also start working on a special project to bring to their family seders.