שלום Kitah Alef students and families:
Today we celebrated the end of Sukkot.  Tomorrow night, Simhat Torah starts—rejoicing in the Torah. With the rest of the school, we joined the minyan for prayers in the sukkah.  We shook our virtual lulavs and etrogs in all directions.  For hoshana rabbah, we beat the willows.  As we listened, we realized that they sound like rain, something we pray for in Israel for the next crop. 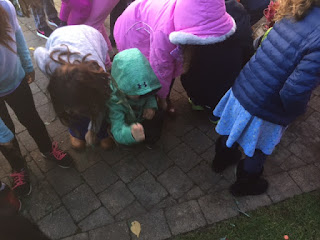 Back in the classroom, we learned about Simhat Torah, the “rejoicing in the Torah.”  We finish Deuteronomy and begin reading Genesis again.  There is a parade of the Torahs (the Hakafot), with the congregation carrying flags, sometimes with apples on the top.
STORY:  To show the relationship between the fall holidays, I read a story written by a friend of mine called King of the Apples.  This large apple was picked and ended up in a refrigerator.  He hears the family talking about Rosh Hashanah, Yom Kippur, then Sukkot, and finally Simhat Torah.  But he is not chosen for the first three holidays.  He wonders what will happen to him.  Will he become apple sauce?  Ask your child what happens.
CRAFT:  Each child made an original flag to bring to the Simhat Torah Hakkafot service.  The Hebrew says Simhat Torah. As you know, we march seven times around with the Torah; then we read the end of Deuteronomy and the beginning of Genesis.  We realize that learning never ends.
We did a review paper on the fall holidays.  Everyone did a fantastic job.  I had planned on having snack in the sukkah, but it was too windy.  When we were in the sukkah earlier, I did say the blessing for being in the sukkah.
HEBREW:  Our lesson today was about the letter מ “mem,” the first letter in mezuzah, matzah, melech (king), and magen David.  Cheryl and I each have our own groups.  Ariel assists the students.  Each week we review the previous letters and work with partners with our Hebrew packs of letters.  Please review the reinforcement paper I send home each week.
BOOKS AND GAMES:  Ariel read Bible stories to some students; others played matching games, a sukkah decorating game, or completed a puzzle.  Students also could do a paper on the differences between two boys holding the lulav and Etrog.
NEXT WEEK, we start learning about Shabbat.  I will be leading a workshop on Creation during the Synaplex on October 29.  I hope that you will be with me then.
Judy and Cheryl (Esther and Tzipporah)