My day at Limmud Boston began with a session taught by Professor Jacob Meskin in which he discussed Joseph II’s 1782 Edict of Tolerance.  Indeed, the more things change, the more they stay the same!  We grappled with the question, “Was the Enlightenment good for the Jews and for Judaism?”  And what did the Jewish leadership of the time think?  As you might imagine; two Jews, three opinions!
My next session, taught by Rabbi Allan Lehmann, focused on the Israeli author Shai Agnon.  We studied two short texts that even in their brevity demonstrated the complexity and irony in his writing.
As the Gesherclass teacher, I couldn’t resist attending, Why Bother Being Jewish in the 21st Century!  Rabbi Adam Chalom addressed the history of options for Jewish expression available to American Jews beginning in 1915.  One could be a Reform Jew, a Conservative Jew, an Orthodox Jew, a Zionist (a Labor Zionist or a Revisionist Zionist or a Religious Zionist), a Jewish Socialist or a Cosmopolitan Universalist…  Then the Holocaust forced a confrontation with how the outside world defines us.  The founding of the State of Israel provided still more options and today, we feel absolutely at home in America:  which poses questions that are strikingly similar to, Was the Enlightenment good for the Jews?  He went on to specify two aspects of the issue today:  justification and marketingand emphasized the importance of both a positive message and micro-targeting.  He ended the session with a reformulation of Achad HaAm’s dictum, “As much as the Jews have kept being stubborn, being stubborn has kept the Jews!” or to quote Walt Whitman in Song of Myself,
Do I contradict myself?
Very well then I contradict myself,
(I am large, I contain multitudes.)
During the afternoon, I had the great honor of meeting Jewish artist, Mordecai Rosenstein and the great humility to try and fail to copy his method of forming Hebrew letters.  I suspect that his work will be familiar to you, http://rosensteinarts.com/

After learning the mishna from Pirki Avot about the “crown of a good name” (keter shem tov), Gesher students may appreciate Rosenstein’s depiction: 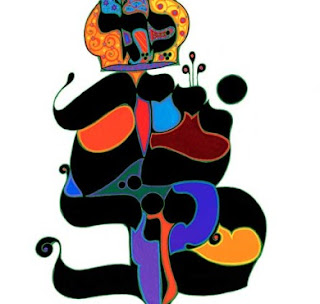 My day of learning ended with a session on “Managing Conflict When Talking About Israel”,  and finally Hanukkah blessings and candle lighting with those valiant few who remained until the end. I can’t wait until Limmud Boston next year—it was a feast for the heart, soul and brain!